This article is about the overview of the Dragandr as a whole. For the species itself, see Dragandr (species).

"At last, I finally swear to lead the Dragandr to the knowledge we seek, so that together a new existence of peace and tranquility can be achieved."
―Last Ruler's-Oath that a Philosopher King must say.

The Dragandr are an ancient civilization that originated on the planet Ainulin, dating back to the beginning of the Second Age. Though having the technology to rule many more worlds then they do now, the Dragandr are peaceful, and thus only have a solar system or two under their control. Highly intellectual and curious, all they seek is knowledge so that all beings, whether it be themselves or other races, can live in a peaceful existence. They are currently negotiating whether to be part of the Galactic Senate or not, though they have allowed Gaedheal to join for reasons of galactic security.

The regular Dragandr are bipedal Humanoid repto-mammals, with grey shaded hair (sometimes white), pale to lightly tanned skin, and felid-like eyes with tapetum lucidum within. They also possess a tail that is spiked at its end. 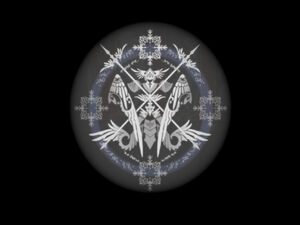 The government of the Dragandr is a monarchy where the leader, called the Philosopher King (or Queen if female), is chosen from among the populace, picked based on merit and intelligence. The king or queen is also aided by the Sage Council, consisting of the Dragandr's most leading individuals, whether it be through conquest (rarely), high knowledge of a certain topic, or even simply wise through old age and experience. Also, if the populace feels that the current leader is insufficient for the Dragandr's needs, they can have the Sage Council vote whether to replace the leader or not. In their history the Dragandr have only done this three times.

The Dragandr culture is deeply rooted in the myths and legends of their past, but fused with the modern Dragandr's quest to gain knowledge and make a perfect existence. Semi-agnostic, they do not truly believe in a god, but they do realize that there are powers that are greater than them and most often uncomprehendible to them yet. So, though they dont worship these beings, they do hold them in high esteem and respect them greatly.

Almost all Dragandr speak the common Dragandr language of Mnemosyne Speak. It's alphabet consists of 28 symbols, or "letters", of various shape, which doesnt include sounds that the symbols represent when the symbol is in a different angle or has a suffix and/or prefix or other changes. The symbols represent the 28 basic sounds the Dragandr's mouth can make. There are two versions of it's written form, Simple Mnemosyne Speak and Complex Menmosyne Speak. Simple Mnemosyne Speak is simply writing out the words in an organized sentence, much like how human English is written, only instead of periods there are lines to indicates sentence endings, and small H-like shapes to show the seperation of each word. In Complex Mnemosyne Speak, complete phrases or ideas are writed as a single glyph, consisting of each individual word making it up. Sentences are made up of two or more glyphs, each representing a part of the sentence. Each phrase is read inward and then counterclockwise. Seperation between phrases and sentence endings are represented by the same H-like symbol and line.

The Dragandr dont technically have a religion, due to their semi-agnostic viewpoint towards "creator" beings. However; they do follow philosophies, and there are a varienty of them. Dragandr are not limited to one philosophy, and many believe in two or more of them.

Since the Dragandr aren't very war-like, they do not have a massive military force. However; they do have a well-sized army for defense called the Dragandr Oracle Knights, which includes all military personnel, robotic armaments, and starships. The Knights, both Dragandr personnel and robotic armaments collectively, as well as starships, are divided into divisions called Brigades. Each Brigade has a fleet of ships under its control, and several hundred Dragandr personnel and robotic armaments. The leader of each Brigade is called a Centurion, and all Centurions are lead by the Consul, the commander of the whole Dragandr army.

During the 2nd and 3rd Era, the system of the economy for the Dragandr was a barter system, where they would trade an item for another of equal worth. However; once space travel was achieved and they had contact with other species, they quickly converted the system to coinage. Now, the local currency of the Dragandr is the Quentii. One Quentii is equal to one Nra, the galactic standard currency.

When the Dragandr resided on Ainulin, blue spice was the main spice the Dragandr traded. However; after they were forced to relocate to Taerrus, their trade diversed significantly. Their major spice trade is still blue spice, since Taerrus and most planets under Dragandr control are blue spice planets. However, they have now become serious traders in red, purple, and yellow spice as well, as they have found red and purple spice on Taerrus' two moons, Hephaestos and Noldra respectively. Also, on the neighboring planet of Oulobann and their nearby colony of Gram on the planet of the same name, they have found large deposits of yellow spice.

Called thus because it protects the wearer from the void of space, the Void Armor is a suit designed to give Dragandr protection in space. It's dark silver in color, and looks much like light armor made for the Dragandr. However; it holds a breathing apparatus, a small back jet for propulsion, and an universal communicator and translator.

For a Elda Dragandr, the armor is modified. Since Elda Dragandr cannot really fit on starships (besides the biggest ones), their armor is desgned to be a ship around them. So, it contains much larger versions of the normal Dragandr Void Armor features, as well as two or three propulsion systems. Also, due to their large size, they often bear pods on their backs, which can carry weapons, supplies, or even other Dragandr. The pod is also armed and armored for additional defense of the Elda Dragandr

A warp drive is an engine within a starship that is capable of travelling to different planets, solar systems, even different arms of the galaxy with the right settings and place. It contains a variety of elements, often many halogens and noble gases which have a high valence electron count. When the engine is activated, the elements inside implode via nuclear fission which breaks the atoms apart. The electrons are then thrusted outward all in the same direction from the implosion. Because electrons travel at nearly the speed of light, the combined force of all of them traveling in the same direction thrusts the ship forward at nearly lightspeed. This leaves a trail of electrons behind. In order to return to normal speed, the engines simply turn the other direction to slow down. However, this process is done slowly to avoid any injuries onboard the ship.

Dragandr warp drives have three settings, depending on how far they want to travel. The first setting, Planetary, is for travel between planets. It can be used anywhere.

The second setting, Interplanetary, is for travel between solar systems. Due to the added output of energy, It can not be used near or in a planet's atmosphere. If it was used, the planet will become a wasteland due to the radiation.

The third setting, Galaxial, is for travel between many solar systems, often used between arms of the galaxy. Only the most elite ships have this setting. It cannot be used in a solar system, or it may result in multiple planets becoming wastelands due to radiation, and also eventually starting a chain reaction within the solar system's sun, causing a supernova soon after.

Universal Translator and Communicator a.k.a. the UTC

The Dragandr translator works by first matching the sounds it hears to a database of sounds, catigorized by language. Once it reconizes a sound, it read that database and translates it accordingly. If the language is not in the database, the translator will try to figure out grammer and sentence structure by listening. After a few sentences, it is able to understand the language, and adds it into it's database.

The communicator works by amplifing communication waves by large amounts, and sending them to a specific reciever, which transfers the sounds onto a speaker.

Main article: History of the Dragandr

The Dragandr have had an extensive history over the past 10,000 or so years. Legends and myths abound, as well as amazing discoveries made by the Dragandr.

Retrieved from "https://galactic-crucibles.fandom.com/wiki/Portal:Dragandr?oldid=37917"
Community content is available under CC-BY-SA unless otherwise noted.